For counting the governed people's votes, it requires at lest 1 vote more than 50% of the total number or registered voters to consent - or fail for lack of consent.

With a simple plurality; that of just one more vote than the closest competition; this is the easiest method by which to allow corruption to enter government. It certainly does not encourage the voters be informed at all, let alone well–informed.

The Plurality definitions also work with the two other, more restrictive, vote–count methods. 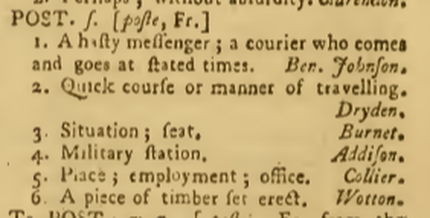 First Past The Post is a big step toward eliminating government corruption; simply by making it more difficult to get into office.

As with plurality, this also does not encourage the voters be informed at all, let alone well–informed; simply because it requires no minimum quorum. This post also is not set prior to the race. Not knowing the defined finish line before the race starts — questions the legitimacy of the race.

Post definition 6 also works with the two other, vote–count methods, but the setting of the post differs with each method. 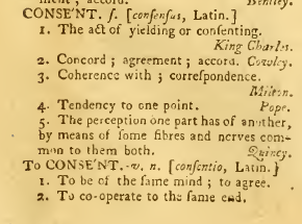 CONSENT OF THE GOVERNED

At present, the votes of those registered as voters, who do not go to the polls, are counted as abstaining; or public opinion has programmed us to assume that the registered voter is being lazy, apathetic, or unpatriotic.

We see that with the 1756 definitions above, the registered voter cannot Abstain, Forebear, Cease, or Neglect to vote; until they remove their name from the registry of voters.

With regards to voting, once a person Registers, they register as a voter. They do not register to vote.

The voter registry is not the same as the voter check-in list. The check list makes certain no registered voter gets or returns more than one ballot. Ballots are necessary for a registered voter to Consent To some thing or some one on the ballot. Thus, the importance concerning The Declaration's phrase, consent of the governed.

Once a person registers as a voter, they only have two options for every balloted item; consent — or Non–Consent. Whether intended or not; not submitting a ballot is Not the same as not voting. It is the same as Not Consenting. Non Consent is a valid vote, in accord with the contract's terms.

From the top of the second paragraph of The unanimous Declaration, it states:

​"We hold these Truths to be self-evident, that all Men are created equal, that they are endowed by their Creator with certain unalienable Rights, that among these are Life, Liberty, and the Pursuit of Happiness — That to secure these Rights, Governments are instituted among Men, deriving their just Powers from the Consent of the Governed, that whenever any form of Government becomes destructive of these Ends, it is the Right of the People to alter or to abolish it, and to institute new Government, laying its Foundation on such Principles, and organizing its Powers in such form, as to them shall seem most likely to effect their Safety and Happiness."

With this idea in mind, consider the definitions for Consent and To Consent when reading the actual words written in the still-enforceable contract of The unanimous Declaration:

"Governments derive their just powers from the consent of the governed."

By definition; Consent of the governed requires that the majority of the total known body of registered voters actively grant their consent — or whatever or whomever is on the ballot must fail for lack of consent.

The CONSENT definitions; Tendency to one point; or To be of the same mind; tells an entirely contrary story than the modern vote–count practice.

It is the duty of the people who want a balloted item or candidate to pass to convince he majority of the total body of registered voters that it is important for that voter to get a consenting vote to the polling station on time.

When 60% or more of all registered as voters do not check in at the polls to consent to any item or any candidate — we see a tendency to one point. The majority, being of the same mind, for whatever their reason, did not consent to anything or anyone on the ballot.

When so few people can be convinced that a balloted item or person is worthy enough to warrant using their time and energy going to the polls to consent — the balloted items all must fail for lack of consent.

THE IMPORTANCE OF THE VOTER REGISTRATION AND VOTER CHECK–IN LISTS

The Voter Registration and The Voter Check–In Lists are the most important elements for getting Clean Honest Government and to Old Math with respect to calculating whether or not an item or candidate on the ballot passes with sufficient consent or fails for lack of consent.

Absolutely every Registered Voter, does in fact vote every time a ballot goes out in their district. We know this because The Declaration states that government gets its honorable power from "the CONSENT of the governed". This creates a default — non–consent voter position.

...Nearly every political jurisdiction in these united States of America has a known number of registered voters.

...In order to get the consent from that known body, the balloted item must be the first one past a specific post or marker. That marker is, at the very least, 50% of the total number of registered voters.

...Specifically, the balloted item or candidate that first gets 50%+1 of the total number of registered voters to consent — wins.
​
...Whatever or whomever is on the ballot that does not get that 50%+1 consenting votes — must fail for lack of consent.